For the second year in a row, California Governor Jerry Brown opened Intersolar 2014, part of the Semicon West conference in San Francisco, with a rousing keynote address supporting solar power and calling for renewed efforts to combat the urgent problem of climate change for the sake of future generations.

Professor Dr. Eicke Weber, Director of the Fraunhofer Institute, discussed several topics including the present and future growth of photovoltaic (PV) solar power, the role of solar and clean energy in solving climate change, and Germany’s decision to abandon nuclear power in favor of renewables during his keynote address at the official opening of Intersolar North America, part of Semicom West. Several other keynote speakers also addressed the assembly including the new San Francisco mayor Edwin Lee, and Prof. Ramamoorthy Ramesh of the DOE.

“The second equally strong – and for some people in the business area even stronger driving force – is we all face the shortage of fossil fuels. Peak oil has been already passed a few years ago when we had 92 million barrels of oil taken out of the ground each day. Now we are down to in the upper eighties, and I think we would never ever reach a hundred million barrels of oil which we would need if we want to continue business as usual. So business as usual is no option.”

“But the big problem is, If we only rely on the power of converting the energy system based on the starting shortage of fossil fuels, we will definitely come too late to solve the climate problem. So if we see that we anyway have no choice but to make the transformation of the energy system to a renewable energy system, why not make it quick enough that in this course we as well take care that the climate problem doesn’t get too serious. This is a challenge the world, our generation, is facing and I personally can say it is the most important challenge for many of us.”

“Just one word to the nuclear power plant issue, it was raised in a question just shortly ago and you all know that Germany at the moment has gone out on a limb compared to all other countries and almost all other countries of the world. And why has it happened in the aftermath of the Fukushima catastrophe. …”

“The first point is nuclear energy is a technology like some other technologies we are using which will never be a hundred percent controllable. You can control a nuclear power plant, you can predict if you know the starting conditions what will be possible paths of how this thing will behave … But if our fantasy is not enough to think about all possible combinations of starting situations in advance we might enter situations like we had in Fukushima with a combined failure of the external power grid and the emergency generators. And this combination happened as a consequence of a tidal wave and an earthquake, but this combination can as well happen for other reasons. In Sweden was a nuclear power which almost came to a meltdown when there was a failure of the power grid and the first emergency generator failed and the second emergency generator which was identical in construction to the first generator started for reasons nobody understands because these two guys were built in the same way. So if the second generator would have failed too, we would have had in Sweden a few years ago just a Fukushima accident. ”

“…in the case of a nuclear power plant you can endanger hundreds of millions of people. If the wind from Fukushima would have blown in a different direction right after the accident, who would have evacuated 35 million people? It cannot be done. So I think, and we in Germany came to the conclusion, for nuclear power plants, this principle risk of complex technology cannot be tolerated. We endanger potentially millions of people and the damages we are facing is not being paid by any insurance company, the damages as we see in Japan is created is taken care for by the taxpayers. Therefore the Germany policy and this is a very interesting date, just last week in the second chamber, decided to finally get rid of nuclear power in Germany for all time. To shut down eight reactors immediately forever and to shut down the remaining nine reactors gradually till 2022 and to replace most of it nuclear and fossil power as quickly as possible by renewable energy.”

One benefit of rooftop PV solar as part of the renewable energy future:
8:28 “The beauty of the decentralized installations is you need very little changes to the grid, because basically what you do is you take demand off the grid.”

A topic mentioned in Weber’s talk and in other talks at Intersolar, was the accuracy and efficacy of the common term “feed in tariff”:
10:39 “In Germany we have a very good way to show the progress, because in Germany we use a feed in rate. Which simply says anybody who creates photovoltaic energy gets a fair price paid for this. Some people have translated this with the word ‘feed in tariff’ which is a completely stupid translation because the feed in rate has nothing to do with a tax or a tariff. It is just a word-by-word translation of ‘Einspeisetarif’ in German, so someone just made a massive mistake. So the feed in rate is just the fair price for electricity which should be offered to anyone who puts PV or wind or other sources of renewable energy into operation.”

Nearing the end of his talk, the audience in the conference hall, largely comprised of solar business people, applauded Weber in response to his personal call for redirecting funding from military use towards renewables:
“Basically the transformation of the global energy system is the biggest economic stimulus program since the invention of tanks and weapons, because of course the whole defense industry uses exactly the same argument. So let’s get rid – I say this as a person and not as a representative of my institute – let’s get rid of the weapons and use the same thousands of billions of dollars for the generation of jobs in the renewable energy sector.”

InterSolar played a very prominent role this year as part of Semicom West, with three complete floors of the Moscone West Hall dedicated to solar energy displays. There were countless variations of photovoltaic solar panels from manufacturers around the world, with a strong showing of manufacturers from Germany and China. The growing photovoltaic field appears increasingly crowded, with many companies struggling to stay afloat amidst a depressed global economy and a sudden halt to PV demand from Spain due to abrupt policy corrections, closing a market which had previously been booming. Solar PV has been on a bit of a roller coaster ride with the market crash, installation slump, and drop in PV prices, so we may expect a shakeout of the weaker companies. Optisolar recently went bust and was acquired by EPOD Solar (Allora). 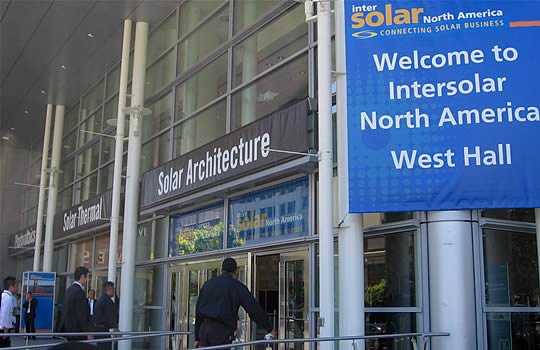 Also worth noting were the far sparser group of companies promoting solar thermal products, including both the well established flat panel solar thermal collectors as well as the more recent evacuated tubes. The solar thermal market may prove to have tremendous growth potential both for product sales as well as for those installation companies servicing homes and businesses. 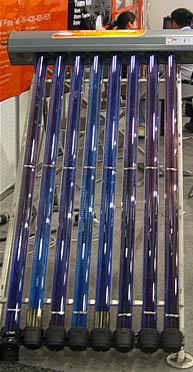 Solar cooling could alternatively be accomplished using the electrical energy created by photovoltaics to drive air conditioners, the higher cost of the PV panels vs. solar thermal collectors, in addition to the inefficiencies of multiple energy conversions, clearly point to the advantages of solar thermal. In addition there is the energy payback time. For photovoltaics, it can take years to recapture the energy used to create the panels – purifying silicon consumes a good deal of energy. Evacuated tubes made of simple materials like glass and copper require a much smaller up front energy investment. While excess electricity from PV panels can be saved in batteries or returned to the grid, excess heat from solar thermal is harder to save. Bulky solutions akin to enormous water heaters were mentioned, heat pumps to store the summer heat into the ground for later use, and the elusive state change chemical storage were all discussed.

Copper, a metal with excellent heat transfer characteristics, poses a limit to full global scale deployment for most solar thermal designs – there will simply not be enough copper available on the Earth. However, ideas were presented by John Rekstad of Oslo University for solar thermal flat panels made primarily of special polymers so expect other solutions looking forward.

Gerhard Stryi-Hipp, the chairman of the European Solar Thermal Technology Platform (ESTTP) posed the question: “How can fossil and nuclear power be replaced by renewable sources?’. He reports that approximately 50% of the energy used in Europe and a similar percentage in the United States is used for heating and cooling structures. To address this need, he says “solar thermal has the biggest potential under all the renewable energy sources”. The vision of the European Solar Energy Platform for Heating and Cooling is that by the year 2030:

Meeting these goals will require a dramatic increase from the 13GWth currently installed up to 2400 GWth by 2030. By 2020 the goal is 80 GWth, requiring a 34% annual market grown, with a target of one square meter of solar thermal collectors for each inhabitant in Europe. 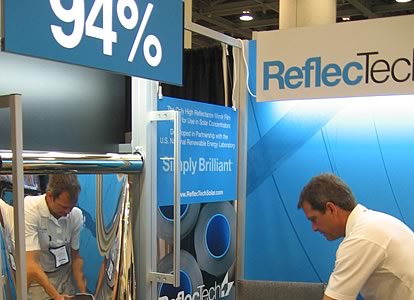 In the United States, there are still several limitation to expanding small scale solar thermal deployment – lack of trained installation technicians, low public awareness, and inconsistent availability geographically of collectors. Photovoltaics are already well known and increasingly accepted, and in most cases they integrate easily into existing infrastructure. Solar thermal collectors, while cheaper than PV panels, require plumbing know-how to install. The two technologies are in fact complimentary, many structures in Europe already have both working simultaneously.