Beyond spicier, more delicious lunches, there were other notable differences between India’s first SolarCon India2009 solar conference, held in association with InterSolar India/SEMI, and the recent InterSolar/SEMI San Francisco conference. Whereas in San Francisco three full solar exhibit floors were crowded with large photovoltaic panels from an bewildering number of manufacturers, in Hyderabad the sparser and smaller PV displays from just a few companies didn’t really stand out even on the single floor of exhibitors – perhaps just approaching the smaller number of solar thermal displays in SF. And as for solar thermal in Hyderabad, only a few images on exhibitor display panels were to be seen. 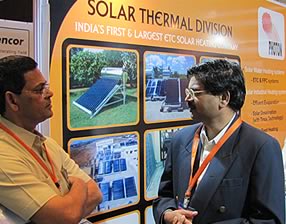 But there were to be found technologies appropriate to the conditions of the region, such as the Diya Solar PV Lantern by HHV Solar, a solar charged alternative to kerosene lighting for rural homes off the grid. In a Climate Change and PV session, panelist Vishnu Reddy presented a statistic making it clear just how necessary such solar powered alternatives are: 100 million homes in India rely on kerosene for lighting, a public health concern. 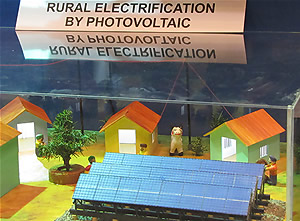 Why lug around heavy panels to trade shows?

Video: Fielding an audience question, Shankar Venkateswaran makes an insightful point about the lack of existing infrastructures with the long scale time horizon needed to respond appropriately to climate change.

Shirish Sinha of WWF presented an analysis based on the concept of a carbon budget – the maximum total amount of CO2 which can be released into the atmosphere between 1990 and 2050 if global temperatures are to remains within the 2 degree ‘safety’ limit which scientists say is necessary to avoid the most catastrophic effects of global warming. Since Northern industrialized nations have already used up a good percentage of this budget, the argument is made that, to be fair, it is the developed nations that must cut back dramatically while allowing developing nations to use a higher share of the remaining budget.

At a time when budget constraints are being cited as an argument against climate mitigation commitments, Sinha reminded the audience that “the cost of inaction will be much higher than the cost of action”. 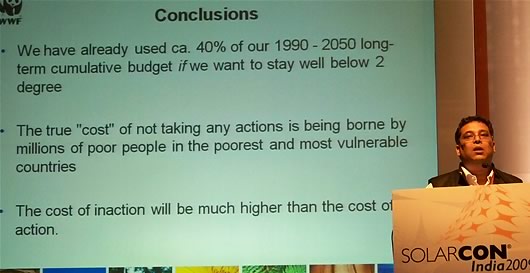 Another subtle difference here between the flavor of the GHG discussion in Hyderabad vs. San Francisco involves the consideration of those populations expected to acquire access to energy with development in the near future. In SF, many generally frame the goal as to quickly reduce GHG emissions of existing consumers, with the help of solar power, towards achieving dramatic emission reductions by 2020 or 2050. The concern about billions of new ‘consumers’ in developing nations getting access to energy is often presented with an overtone of ‘necessary, fair, but nonetheless somewhat threatening’. In Hyderabad, a different tone was consistently heard across several speakers: getting poorer and more vulnerable people access to electricity was simply good, right, and just – another social problem to be addressed as part of solving climate change and equity issues – with PV solar as one solution to provide that rural electricity to those areas off the grid. 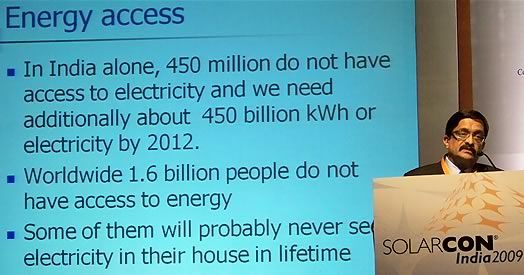 Shirish Garud of the Energy and Resources Institute

Video: Shirish Garud frames the need to provide electricity to 450 million people as an adaptation issue, electricity being necessary to enable people to respond to climate change or any other calamity. 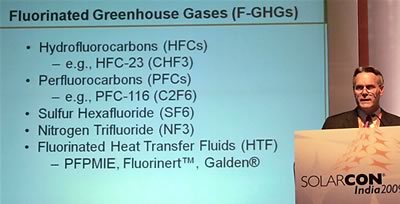 Aaron Zude of SEMI adds a damper to the ‘how green thou art’ PV revelry, describing in some detail the many chemicals used in manufacturing solar panels which have GHG equivalents far exceeding CO2. 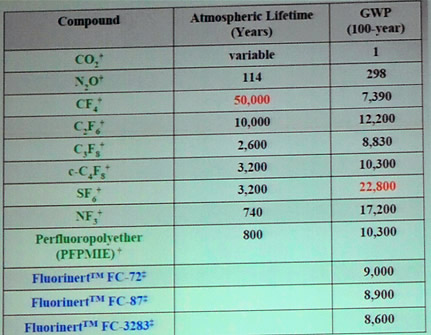 In practical terms, the climate change issue may help secure governmental financial incentives, still in both Hyderabad and San Francisco conferences one gets the sense of hundreds of businessmen pursuing opportunities in a promising market rather than dwelling on the potential catastrophic effects of climate change. Yet as evidenced by the scale of vendor investment, the Indian market is clearly not as compelling as that in the United States. However, an expected mid-November major announcement by the Indian prime minister Manmohan Singh is expected to greatly buoy the status of solar in India.

As important as climate change may be, it’s worth noting that the panels on economic and policy aspects of promoting solar power drew a larger audience than the climate change panel. 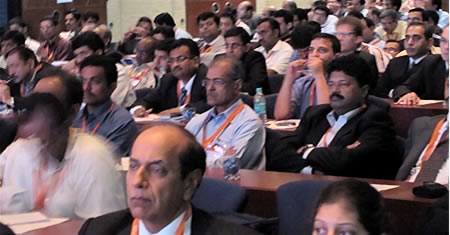 A strong turnout for Puneet Rustagi on the financing of PV.

The sparser yet still respectable audience for the afternoon PV and Climate Change panel.

SolarCon has already announced plans for a bigger and better SolarCon India2010.